Geocaching with Garmin - a must have?

I am a casual geocacher now since more than 5 years and ever since I started I have wondered if a dedicated GPS device wouldn’t be the better option than using an iPhone. The most obvious feature I’ve been missing is accurancy of my current location. Depending on my iPhone generation and the nature around me (trees, rocks, …) there are easily some meters difference between location on screen and location in reality.

As also my wife is geocaching together with me she also looked many times on others having a dedicated GPS - even more when we had to search a long time because our position being not as good as it should.

So I took the chance and wanted to gift a GPS device to my wife. Oh man, how many devices are out there and how many lists with “the best one”. After a long journey through dozens of long articles I ended buying a Garmin eTrax 30x. Not the most expensive one (in the end we are doing it only every now and then) but also certainly not the cheapest one. With all European maps included and the dedicated Geocaching function I was very confident that this a good upgrade for her setup.

Right after opening the box two surprises: no batteries included and a Mini-USB-cable for the connection to the PC. Yes, you have read right: Mini-B-USB. I can’t remember when I have last seen this outdated plug - Micro-USB has taken over the world for years and is already about to be replaced by USB-C. Gives a first hint on how old this device is (even so being the most recent one sold). The documentation is a bad joke - they should have saved the paper. The one thing we were interesed was of course on how to get some caches onto the device. The documentation tells us how easy it is: on your PC open https://www.garmin.com/geocaching and start from there. Well, this is what you get if you do so: 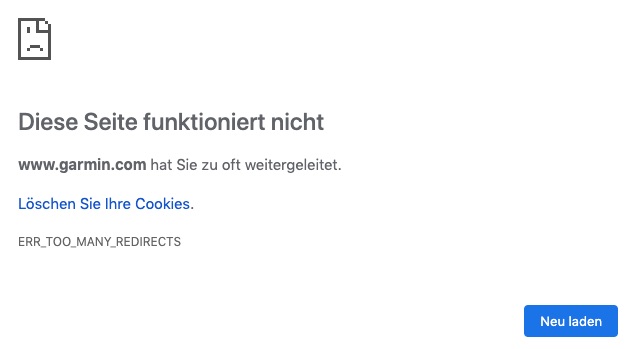 Anyway, after we have had organized some batteries (btw: yes, batteries!) we’ve been on a hiking trip anyway with some caches on the way so let’s try it out manually. This device has no preinstalled geocaches (as other devices do - “250.000 caches preinstalled” can be found there) but for a first try and having good 4G reception why not simply enter the coordinates into the target? After having done this using the complicated to use stick: how to now get routed to this target? The user interface is complete garbage and the navigation using the stick and some buttons is challenging. But it turned out the biggest issue is that you need a route and waypoints first. What’s wrong with the simple use case: enter target, navigate there?

We were not really able to figure it out fully on the walk (at least we got a waypoint and some routing for the first two caches) and the accurancy on the first cache was great - within a small wood the device pointed us directly to the correct point while the iPhones were 5 meters off. Well played!

The second cache’s accurancy was not better than the iPhones - all of them being off for the same amount in different directions. Maybe to many trees or rocks here? After this we decided we have to make the device really useful by adding caches from the Geocaching.com website when returning to the camping ground and continued with the iPhones only.

When back at the camper (and the laptop) I invested two hours in research on how to use the Garmin (which is as complicated as we already uncovered) and even more important how to fill it with caches even so the link from the documentation is broken (see above). It turns out that Garmin announced a great new feature called “Send to Garmin” at Geocaching.com’s website using Garmin Express. So I installed this tool on my Mac, connected the device, did some updates and then I wanted to add caches.

Turns out this “Send to Garmin” function can be used on lists. As I have never used lists on Geocaching.com I first had to figure out how to create one and add multiple caches. Turns out it’s complicated (not Garmin’s fault of course). I was hoping to find some puplic lists like “all caches in Germany” ot at least “all caches in Brandenburg” but no, this is not available (I assume lists are to limited). Manually adding single entries works but this takes so much time.

Still we wanted to have another walk and collect one geocache so I created a list with this cache (and a second one for testing) as well copying a public list with >400 best caches in Germany. Then I clicked the “Send to Garmin” button and the sync started. It took forever and after two retries we got the short list (the two entries I created myself) on the device. The other list never got synced…

So now for the first time I was able to see the dedicated geocaching user interface (incl. size and logs) and the best I can say is: it’s available. Even I (being a nerd used to complicated UIs) wouldn’t want to use it - or even worse being forced to prepare long and complicated everything on my laptop. My wife even hasn’t used her account on my Mac for months - say hello to iPhone and iPad.

This was the moment when we were sure: pack everything back into the box and send it back to the dealer. So to answer to the title of this blog post: No.

So how have we been using Geocache since years? Using L4C or Cachly we have a look at the map (which is live!) where to have a walk. Then we download the caches for offline use (incl. logs, photos, …) and go there. Sometimes even more spontanous while walking just checking with said apps if there is something close and if so collect it. It’s that easy…

It seems hardcore cachers are planning the whole journey at home using special tools (I have been recommended the Windows only Geocaching Swiss Army Knife for example) and store them as route with many waypoints on their Garmin. That’s simply not us….